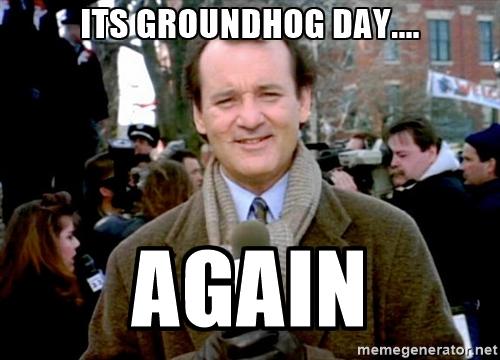 "Well, it's Groundhog Day... again?" I love this scene because Bill Murray's character is stating something that is both matter-of-fact and yet deeply puzzling at the same time. Why exactly is he reliving the exact same day over? Is everyone in on some elaborate prank? Is he dreaming?

While none of us, I hope, are actually stuck in reliving the exact same day over and over again, some come quite close. Routines can become so habituated and workdays so repeatable that short of our clocks telling us it's a new day, it can feel like an endless series of do-overs. We could argue the pros and cons of this type of life, but that's not the focus of this article.

There's a more insidious rut that one can fall into despite adamantly trying to create change. I'm not sure if there is already a term or label for it, but what jumps out is Goal Groundhog Day. You may have experienced this personally, but just in case you haven't, it goes something like this.

Regardless of what X actually is, the tragedy is there is an endless loop of starting and stopping until that becomes the habit! Taken to the extreme it becomes Learned Helplessness. Essentially, one becomes habituated to the idea that, despite REALLY wanting to change, it's not going to happen because of dozens, if not hundreds of previous failed attempts.

So how does one break this vicious cycle? I'll touch on that more in subsequent articles because each method warrants a thorough discussion. However, the first step to addressing any problem is simply being aware of the problem. Where do you get caught in Goal Groundhog day? Is it a goal you're truly committed to pursue, or is it just a nice to have? Are there other things you can try, other resources that are available? These are great questions to start asking and acting upon in order to break the pattern.